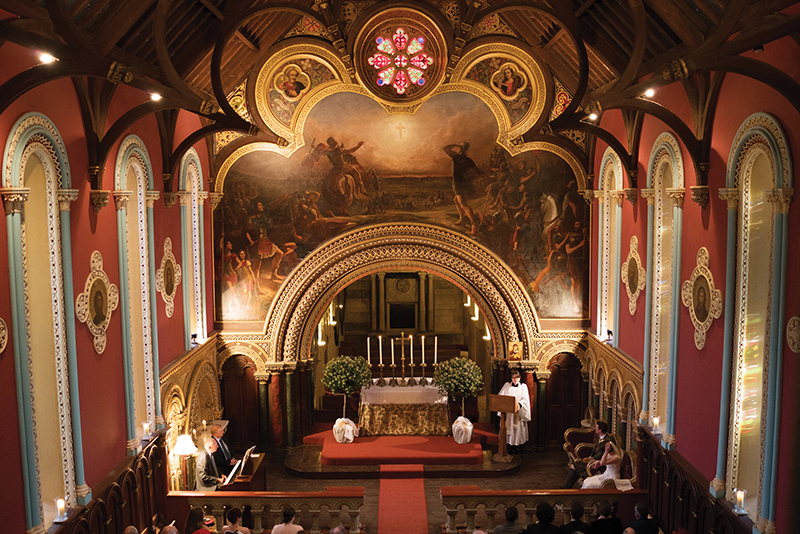 If you think the Victorian Murthly Castle is impressive, you should see its church. The Chapel of St Anthony, which can be used for ceremonies of all Christian denominations, is a good-looking building (one of its architects would go on to design Big Ben). Humanist ceremonies can be held here too, and up to 220 guests can attend.

“The interior is so stunning it stops people in their tracks,” enthuses Murthly Estate’s Thomas Fothringham. “But what can’t be captured in a photograph is the chapel’s warmth and spiritual atmosphere, especially when it’s lit by a multitude of candles. It gives your ceremony the setting it deserves.” 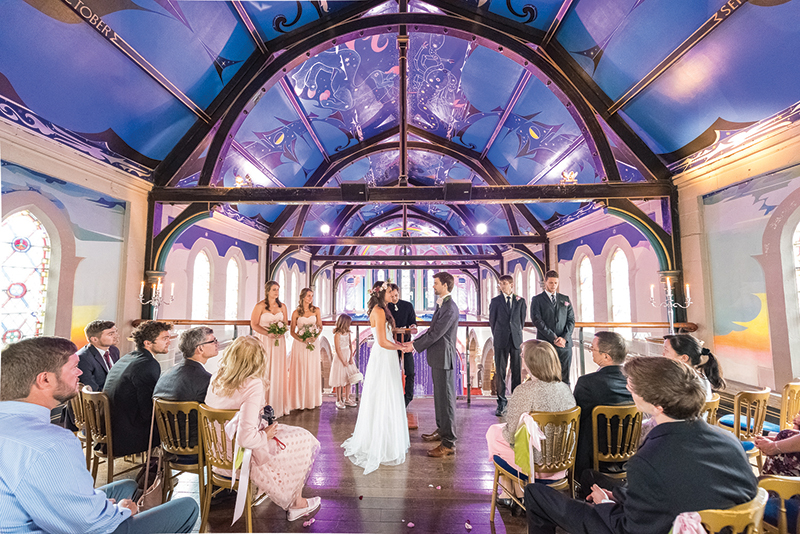 This former church in Glasgow’s West End is a unique place for weddings and civil partnerships. Its auditorium and gallery are both ideal for ceremonies, while the private dining room can be used for intimate gatherings of up to 55 guests. The ace up Òran Mór’s sleeve is its celestial ceiling mural by Alasdair Gray, along with several original stained-glass windows and features that date from its days as a place of worship.

Mount Stuart and University of Glasgow 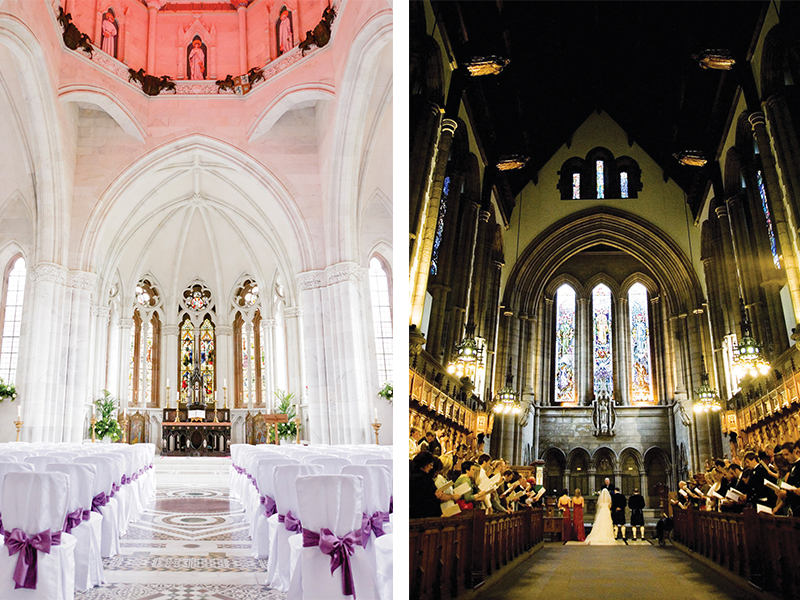 Mount Stuart is a neo-gothic 19th-century mansion on the Isle of Bute in Argyll can host both ceremonies and celebrations. There is space for up to 200 guests to witness you tying the knot indoors or outside (160 if you choose the on-site chapel), and the breathtaking Marble Hall is available for the wedding breakfast and evening reception.

“What makes Mount Stuart different from other venues is the atmosphere,” claims its events and production co-ordinator, Ricky Harrison. “The chapel offers a bright and invigorating space for your ceremony, which is in contrast to the cosy and relaxing atmosphere of the Marble Hall.”

The University of Glasgow’s romantic gothic cloisters feature in many a wedding photograph – in fact, much of Gilmorehill, the university’s home on the edge of Kelvingrove’s green acres, lends itself to weddings. Its spacious chapel, for example, is a favourite for ceremonies of those with links to the uni.

Built as a memorial to graduates who lost their lives in the First World War, it has a sense of respect and dignity fused with an atmosphere of energy and vitality. The university chapel is truly interfaith and is one of the few venues in Scotland that can host both Catholic and Church of Scotland weddings. Humanist celebrations as well as those from other denominations and faiths can also be held here. 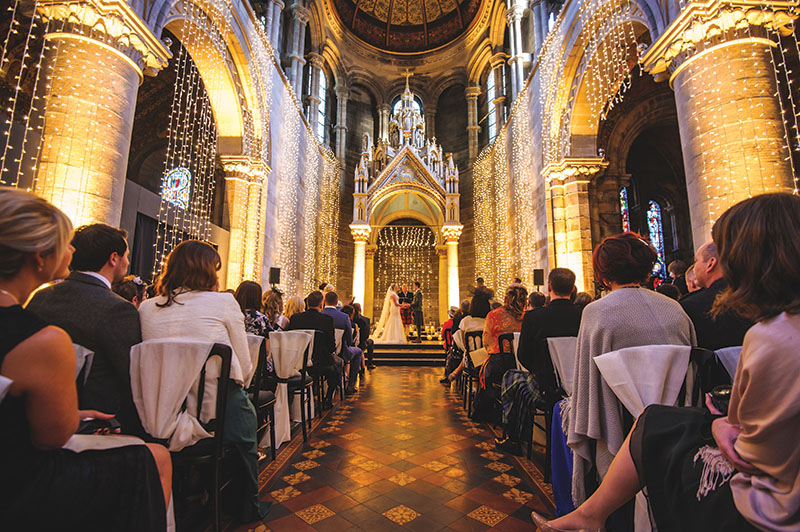 Built in 1885, Mansfield Traquair is a vital piece of Edinburgh’s architectural and artistic heritage. Now fully restored and preserved, it’s well known as a spectacular venue for events, but it’s most famous for Phoebe Anna Traquair’s amazing murals, which she painted in 1892. The combination of the brilliant colours and soaring spaces have led to Mansfield Traquair being called Edinburgh’s Sistine Chapel.

“For a city-centre wedding in a dramatic venue, it’s hard to beat this,” says Siobhan Waddell, marketing manager for Heritage Portfolio, the company that runs Mansfield Traquair. “It’s wildly romantic, steeped in history and graced with the most beautiful art.” 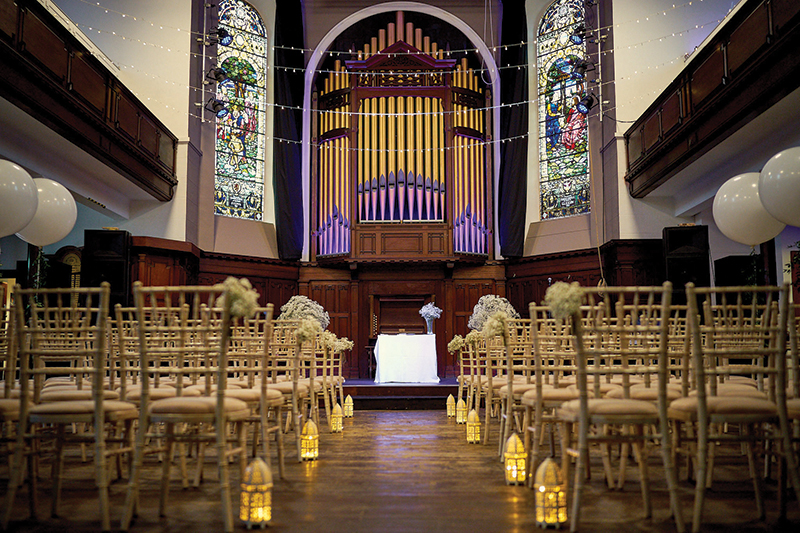 If you’d like a city-centre wedding with a difference, St Luke’s in Glasgow’s east end is worth considering. This Victorian church has many eye-catching interior features, including vaulted ceilings, stained-glass windows and a working pipe organ. “I think what makes the venue special are these timeless original features,” agrees Alyson from the venue’s events team. The atmospheric ceremony space is on the ground floor of the listed building and is available for civil, religious and humanist weddings. 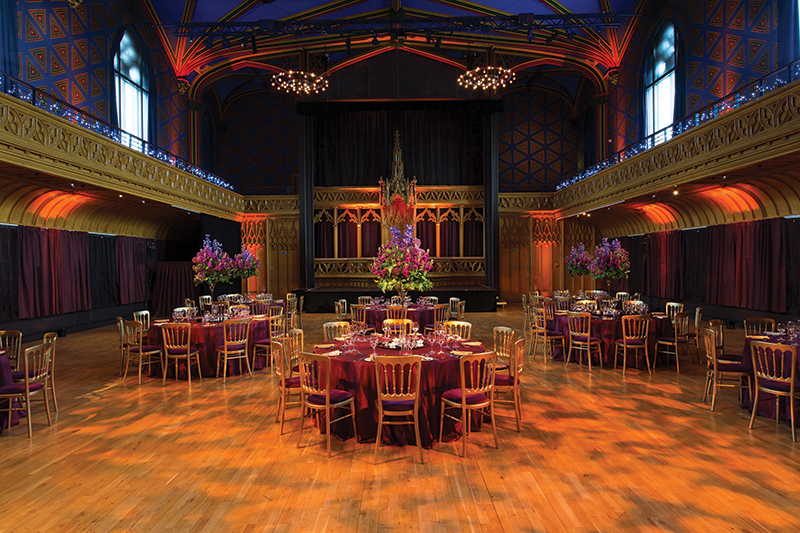 Thanks to its dramatic gothic steeple, The Hub is one of the most recognisable buildings in Edinburgh. It has a splendid spot right at the top of the Royal Mile, a stone’s throw from the Castle, and with superb views over the Old Town.

“Our historic venue has all the elegance of classical Victorian architecture, adding a fairytale-like atmosphere to every wedding held here,” says general manager Fi Morley. “It’s open to couples of all denominations, and it has the flexibility to accommodate large, extravagant dos, more intimate ceremonies, and everything in between. The architecture and rich history of our stunning building make it completely unique.” 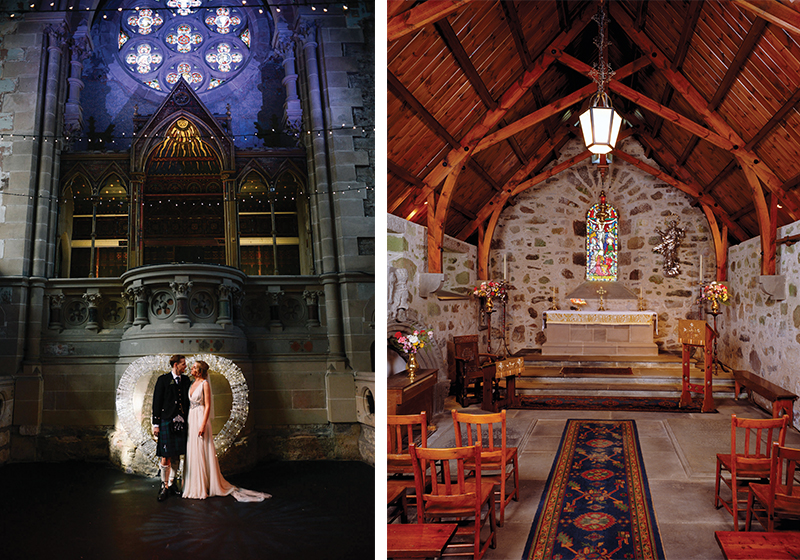 Another former church in Glasgow’s leafy west end, Cottiers is a long-established arts venue with its own theatre, bar and restaurant. Originally known as Dowanhill Parish Church, it was built in 1865 by the celebrated Scottish architect William Leiper with designs by Daniel Cottier, who created the intricate decoration and fabulous stained-glass windows. Packages at Cottiers can be tailored to all budgets and tastes, and it’s even possible to hire decorative theatre props at a reasonable rate – sure to be a talking point among guests.

Set amid an ancient oak forest in Royal Deeside, Drum Castle is an incredible place, with a medieval tower, a fine Jacobean mansion house and opulent Victorian interiors. It has a 16th-century chapel in its grounds, which is surrounded by yew and holly trees. It hosts religious ceremonies, with space for up to 50 guests. Your friends and family can then spill out onto the lawn for a champagne reception, or take a private tour of the castle with an experienced guide (Drum is a National Trust for Scotland property, so you know the guide will be an expert).

Borthwick Castle is a remarkable exclusive-use destination just 12 miles from Edinburgh. The top floor of the historic fortress is ideal for an intimate ceremony for up to 85 guests, after which the party can get underway in the wonderfully atmospheric Great Hall.

“Borthwick Castle provides a bride and groom with the opportunity to experience their very own fairytale ending in the knowledge that they won’t be sharing it with anyone but their own guests,” says the venue’s Lizzie Fisher.  “Warm, opulent interiors, sumptuous cuisine created by our Roux-trained chef and attentive yet discreet service make for a memorable big day.” 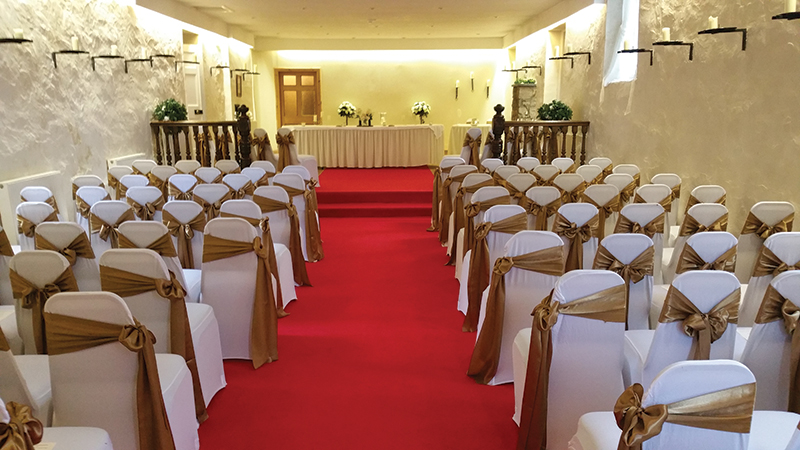 Shieldhill Castle Hotel near Biggar lends itself to an idyllic, get-away-from-it-all wedding, and its 15th-century chapel only adds to the charm. “Lit by candles, the chapel provides a unique sense of intimacy and romance that is ideal for a marriage ceremony,” suggests Shieldhill’s events manager, Fiona Alexander. Of course, the hotel itself is pretty special too, thanks to the castle’s long and rich history and its lovely setting.

About 14 hours ago from TietheKnotScotland's Twitter via Hootsuite Inc.

Prosecco and prizes?!? This sounds like a prime opportunity for some #bridetribe bonding with @OranMorGlasgow... tietheknot.scot/round-up-your…

We'll be leaning in to all things Scottish later this week in celebration of Burns Night, and that includes a tour of some of our bonnie country's best venues. Which has your vote? For timings and more info, please visit: ed.gr/b5lzo pic.twitter.com/9hwKqVOddW