Faced with endless rails of frothy tulle and slinky lace, how do you find the right gown? Three brides share their experiences at Scottish boutiques 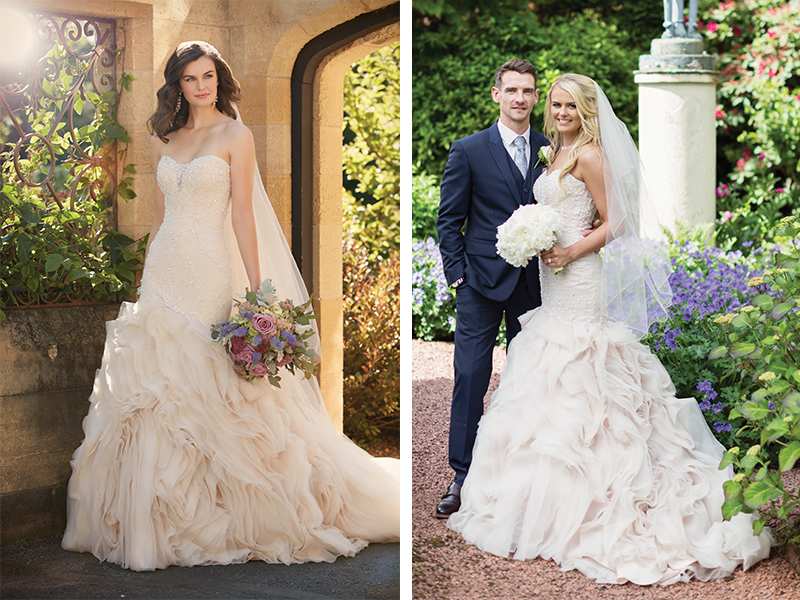 Gemma Wylie married Craig Bryson at Brig o’ Doon in Ayrshire on 10th June 2017. She explains what drew her to Diane Honeyman and the Essense of Australia gown she eventually fell in love with:

“I knew from day one that I didn’t want a traditional white dress. I was hoping to find a champagne one instead – which made the choice a little more limited. I was less sure about styles; I only knew that I wasn’t keen on princess gowns.

The hunt began on a cold December day. I’d browsed a few websites and flagged up some dresses before I went shopping. I had heard fabulous things about Diane Honeyman in Ayr and, after visiting several other helpful boutiques yet feeling deflated, I thought, ‘What do I have to lose?’

I walked in and there was a beautiful blush gown on a mannequin by the doorway. I admired it but dismissed it, because I thought it wasn’t at all what I was looking for. The girls in the shop told me that it had only just arrived and that no one had tried it on yet. Although I was adamant that it wasn’t for me, I was persuaded to try it.

Well – that was it. As soon as I put the gown on, I was smitten. I felt like a princess and didn’t want to take it off. The bodice was tight-fitting, ensuring my figure wasn’t lost underneath.

The colour, Moscato, meant I had to rethink my bridesmaid dresses. The girls ended up in ivory gowns, also bought from Diane, so we had a bit of a role reversal!

It just goes to show that things aren’t always what they seem. If in doubt, try it on!” 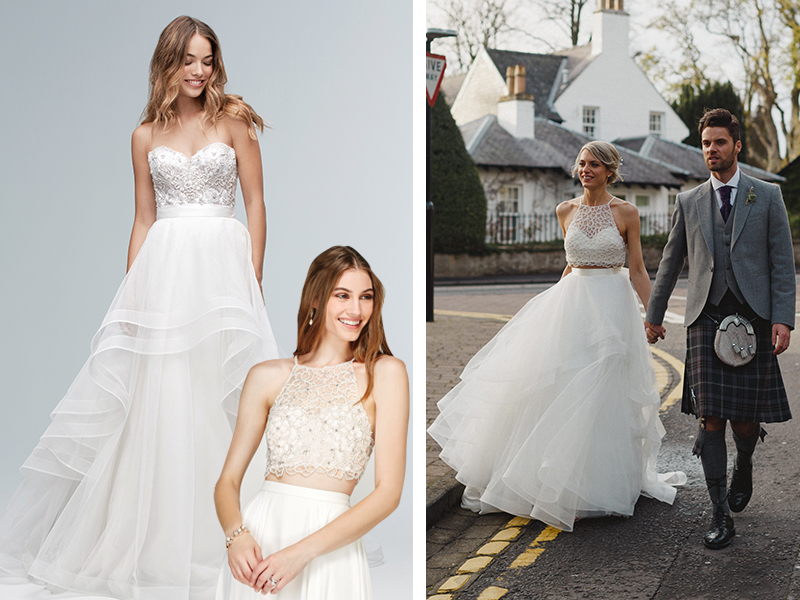 Kimberley McLean and Colin Guthrie held their nuptials at Brig o’ Doon on 14th April 2017. Kimberley tells us about how she surprised herself by opting for Watters separates from Anne Priscilla:

“The dress I finally chose was nothing like what I had imagined I’d wear. I thought I’d probably go for a fishtail style.

My experience at Anne Priscilla Bridal was amazing. It was the second shop I went to and I knew as soon as I stepped through the door that I would find my gown there.

I had seen two-piece designs in magazines and loved them, but I never thought they would suit me or that I would have the confidence to wear them, so I set the idea aside pretty quickly.

Ashleigh, who helped me in Anne Priscilla, showed me some gorgeous gowns, but said she could tell that none of them were The One. When she asked if anything else had caught my eye, I mentioned separates, adding that I was really not sure. She convinced me to try a two-piece on, just for fun. She brought out the exact top and skirt I had admired in a magazine.

I got the reaction I was hoping for from my sister, mother and mother-in-law. I was gobsmacked my mum, who’s quite traditional, adored it as much as she did – she went from ‘a bride needs sleeves’ to ‘get your midriff out’!

I was nervous about saying yes to the dress that day as it was so different to what I thought I’d get. Anne Priscilla put no pressure at all on me to buy.

I went back a week later – and loved it even more. I knew then it was the one (or ones!) for me.” 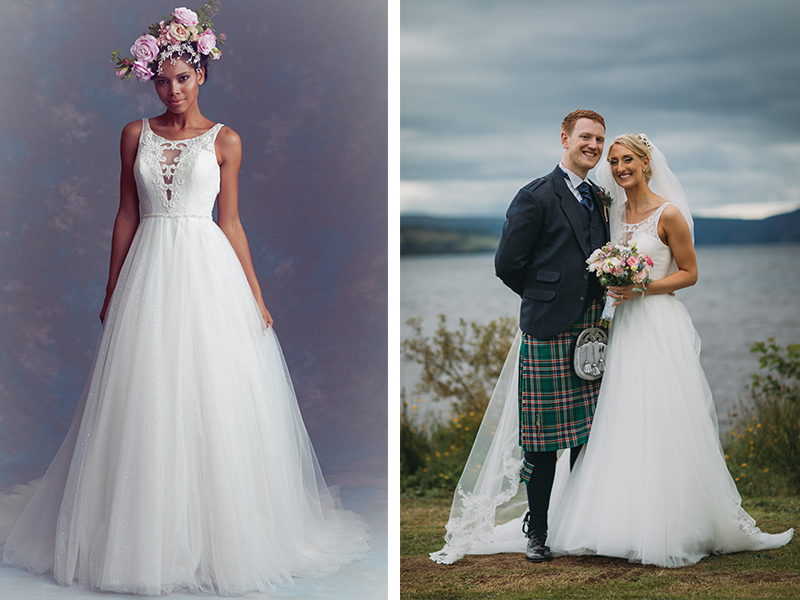 Kerry Boyd married Iain Hendry on 7th July 2017 at Loch Lomond Waterfront. She recalls how, at the eleventh hour, she decided on a Diane Harbridge dress from Bridal Atelier Scotland.

“I had no idea just how many gowns I’d need to try on before I found what I was looking for. I began in Glasgow but nothing I came across gave me that magical feeling other brides had told me about. In fact, I started feeling guilty for dragging my ladies around, making them wait while I tried on so many dresses.

I grew up in the village of Arrochar and am now a teacher at the local primary school, in Tarbet. Someone mentioned a new boutique had opened nearby. I could actually see it from my classroom. I’d have been silly not to go!

At the shop, Bridal Atelier Scotland, I tried on some dresses. The owners showed outstanding attention to detail, offering me different underskirts and veils for each one. They have a real passion for getting it right.

I’d narrowed my choice down to two dresses, one boho and one vintage, and had decided to go ahead with the boho gown. But when I went to get my measurements taken, the pressure of making the decision and being the centre of attention on the day was getting to me. The boutique staff were so understanding. They suggested I try on a new dress they had in stock, Topaz by Diane Harbridge, a glittery A-line gown. I did – and I finally felt like a bride. Everyone cried! I feel so grateful this beautiful boutique was on my doorstep!”